NOTE: All public astronomy observations this semester are cancelled due to COVID-19.

All observations are cancelled due to COVID-19.

The observation deck is 624 square feet in size. It is built out of 2" thick rubber matting for vibration isolation. The primary telescope is a 14" Meade LX600. This computer guided telescope is used for all observation events as well as the lab portion of PHYS 103 (Astronomy). Several additional scopes are setup for observations as needed including Celestron 8" SCTs, a Coronado SolarMax II, and a Stellarvue SV105 Raptor (105mm refractor).

What Can You See? 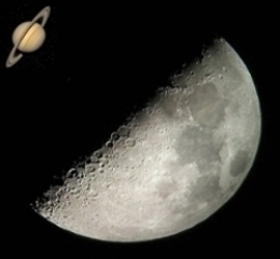 The most spectacular viewing is of the Moon and major planets such as Jupiter, Saturn, Venus and Mars. On clear nights, you can easily see the rings of Saturn and detailed striations on Jupiter. Brighter objects such as the Great Orion Nebula, the Andromeda Galaxy and several clusters are also visible visually.

Dimmer deep sky objects are typically only visible during evenings with low humidity and not much cloud cover. On select night, deep sky cameras are utilized to display images of objects otherwise not visible though visual observations.

Eclipse 2017 at SIU Carbondale.  Southern Illinois University Carbondale hosted 30,000+ visitors to campus August 18 - 21, 2017 for four days of eclipse themed events capped off by Eclipse Day at Saluki Stadium. If you missed this, you'll want to mark your calendars for the next total solar eclipse to pass through Carbondale on April 8, 2024.  Check out the photos at: eclipse.siu.edu

Located on the South West (A-Wing) roof of the Neckers building at 1245 Lincoln Drive. Closest parking in the lot between Neckers and the Public Policy Institute. Enter the building through the west doors facing the parking lot. Take the stairs up to the fourth floor. Meet outside Neckers 456 or follow the signs from there up the South West stairwell.